Lots of companies talk about wanting to hire a great team, build a great product, or “change the world.” And of course, we want these things too!

But since everyone says they want those things, we know we need more than just words to help you understand why our culture is different. So before we start talking philosophy, here are a few specific, concrete things Modulate does differently which might interest you:

Hiring with minimal bias. We go out of our way to avoid biasing demographic information during hiring - including using our own voice-changing technology to transform the voices of each applicant during phone interviews. Building an equitable and inclusive team is deeply important to us, and steps like this help us ensure our subconscious biases don’t get in the way.

Pay transparency. As part of our commitment to transparency and equity within the team, every team member at Modulate is able to view the compensation of every other role. (We say “role” rather than “team member” because we know individual team members may have different risk tolerances, and so some folks might prefer a bit more cash over a bit more equity. As such, we offer flexibility to individuals and don’t reveal their specific choice; but we do transparently share which options someone in that role will be choosing among!) As Modulate evolves, we’ll continue sharing any changes just as transparently, to ensure everyone understands their own opportunities for growth within the organization!

Hybrid work. As a small startup, we’re big advocates of flexibility, but also big beneficiaries of the collaboration and innovation that’s only possible through in-person work. We’ve worked with our team to find the best balance, and landed today on hybrid work. We all come into the office for at least a few core hours on synchronized days (Monday/Tuesday/Thursday) to ensure we’re all there together; and each employee chooses whatever works best for them on Wednesday and Friday. Of course, we also make a commitment to continually check in with the team and re-evaluate this approach, and anticipate that as we grow, individual teams may settle into different strategies depending on their need for in-person collaboration and cross-team communication. To learn more about how we think about hybrid work, check out our blog post!

Acknowledging different styles with “Dex” entries. Each member of the team completes a simple profile within an internal tool we’ve affectionately coined the Modulate Pokedex, or simply “Dex.” These entries share context about each individuals preferred style for giving and receiving feedback, the best time of day for them to join meetings, how they feel about being interrupted mid-workstream, and much more. You can see a snapshot of our CEO’s Dex page below, showcasing some of his preferences around scheduling and how he organizes work.

Recognizing limitations with “User Guides.” A “User Guide” is a document designed to educate others about what it’s like to work with you and how they can get the best results when collaborating with you. It’s a document that requires candid acknowledgement of one’s own limited perspective; and should provide not only tips and guidance for your colleagues to ‘avoid’ your weaknesses, but also to teach them how best to provide you feedback to help you grow! To read an example user guide, check out our CEO’s user guide here.

Leadership growth. Every two weeks, our leadership team hosts an hour-long conversation for anyone interested, in which they discuss topics like where our culture pillars came from; how to build an effective hiring and onboarding process; or even sharing lessons from fields like psychology and behavioral economics that can help take your work to the next level. We also host additional conversations monthly covering the broader evolution of the gaming industry, as well as regularly inviting in leaders from around the industry to share their own experiences and give our team a broader range of mentors to learn from.

While hopefully the above context is helpful, it’s also important to understand what our ultimate vision is for the culture - what are we striving for? In order to answer these, we define eight “culture pillars”, which are listed along with simple taglines below in alphabetical order. The intent of these pillars is not exactly to be unambiguous, but rather to call out the things we consider most important to protect and cultivate within our culture. These pillars may sometimes collide, but that’s ok - we use that as an opportunity to recognize an important discussion that should involve as much of the team as possible, and this gives us the ability to constantly check ourselves against these ideals to see how we’re doing.

Our culture pillars are: 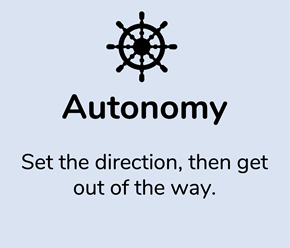 Like most (all?) startups, our founders are entrepreneurs - so you probably won’t be surprised to hear that they value the entrepreneurial spirit, and endeavor to create an environment where every employee can exercise those same muscles. In our opinion, one of the most boring experiences in the world is being told exactly what you have to do and then just doing it. Being able to explore possibilities and solve problems creatively isn’t just an important life skill, it’s fun, and we know that if we can foster that kind of energy at Modulate, the whole organization will benefit from the flow of unique new ideas. 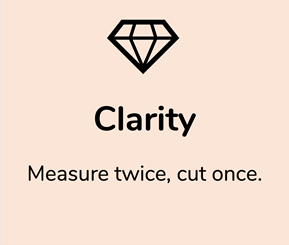 At a startup, there are always a few thousand things that could be done at any given point in time. While it’s great to be thinking about these possibilities, each of these tasks will have its own nuances and complications, and trying to get them all done at once inevitably results in everyone being worst off. As such, we consider it crucially important for each member of the team to not just know some good things to do, but to precisely and clearly know the most important work they should be doing. Sometimes getting that level of certainty takes extra time in the short term - but it always saves time in the long run, so we know it's worth taking the time to really get in sync. 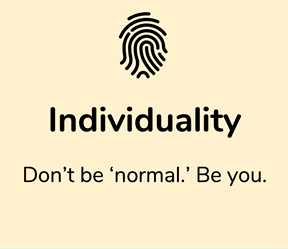 These days, there’s a lot of discussion about how elements of the world are designed for certain kinds of people (often straight white men) by default. Corporations have their own version of this - whether you’re seated in cubicles or a singular open-office plan, companies tend as a matter of convenience to try to fit all of their employees into a single mold, and either assume everyone is exactly the same, or try to force them to become more similar. For certain kinds of organizations, this can be successful - and for certain kinds of people, it can even be empowering - but Carter and Mike are not those kinds of people, and have no interest in that sort of organization. We are excited by the diversity of people, not just in terms of physical characteristics but across every possible dimension, and we are far less interested in trying to assert that any kind of person is ‘better’ or ‘worse’ than in learning about and appreciating the different strengths and weaknesses of each individual. 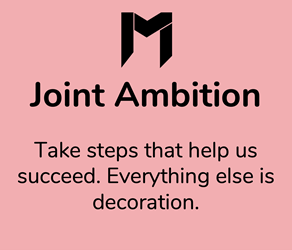 A collection of people without a shared cause isn’t a team. Ultimately, we all joined Modulate not just because it’s a place where we are respected or have the chance to grow - we joined Modulate because we believe that its mission is worth fighting for. We believe in a future where the advances of virtual platforms enable anyone to communicate and interact with others in a way which is not only free and open, but which also permits everyone to express themselves and share parts of their identity to exactly the degree they are most comfortable. We recognize that achieving this will require a combination of novel technical research, a sophisticated understanding of group dynamics and online toxicity, and partnership with a wide range of corporate and personal actors. We truly believe that Modulate possesses the right combination of ethics, experience, and mindset to bring this vision into reality in the best possible way.Because of this recognition, we are constantly asking ourselves how our actions contribute towards that common cause. We aren't here for greed or vainglory - we're here to make Modulate successful. So let's do what it takes to make that happen. 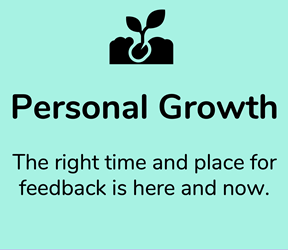 The world is a vast and complex system. We all have goals, and frankly those goals are almost always subject to the whims of luck more than anything else. But that doesn’t mean there’s nothing we can do to increase our odds. Whether you want to become a founder yourself one day, simply see Modulate succeed, earn money so you can raise a family, improve your people skills and then go become, I dunno, a talk show radio host, whatever, there will always be skills and abilities you can improve in order to increase your chances of success. While Modulate expects that hiring a team of folks who are hungry to improve themselves will have benefits for us, that’s not why this is a culture pillar - it’s a pillar because we passionately believe that most people let 98% of their life go by without ever reflecting at this level, and that by taking a moment to really try to learn from what we’re doing, we all have the opportunity to improve our lives in a myriad of potent ways. 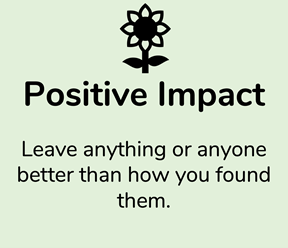 The Positive Impact pillar is something many companies talk about but few actually live up to. Eventually, most corporations fall victim to the profit motive and begin taking actions that may not be insidious or evil, but require ever-more-convoluted justifications to explain the value they bring. Especially given Modulate’s origin - coming from similar technology to deepfakes - Mike and Carter agreed early that the only acceptable way forward would be to build ethics deep into the DNA of the organization, and to empower every member of the company with ammunition to contest new developments which they genuinely fear may be more harmful than they are valuable for the world. 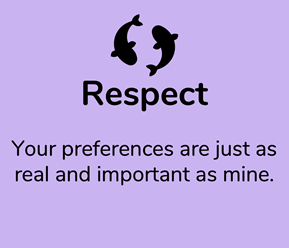 The Respect pillar may appear obvious - after all, few people would argue that it’s better for folks to all disrespect each other. But this ignores the fact that “respect” is a broad term. When we talk about Respect at Modulate, we’re referring to the sort of respect you might show a fellow soldier in a life-and-death battle. They’re putting their lives in your hands, and vice versa, so you tell them what you believe is true, even if it’s not what you *wish* was true or what's easy to call out, and trust them to work with you to face those difficulties and not to shoot the messenger or to panic. 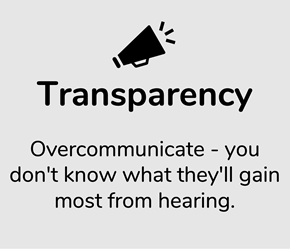 There’s a lot of words for “thinking more clearly” - wisdom, rationality, clarity, intelligence, etc. All of these terms tend to focus more on horsepower or algorithms for thinking, and elide a simple fact - if you are reasoning from faulty information, then everything you derive is tainted and wrong, no matter how clever you are. As such, we believe that transparency is crucial across all dimensions of Modulate - because if people don’t have all the actual information about what’s going on, how can we possibly ask them to make effective decisions? Some organizations attempt to solve this by siloing individuals into narrow fields and restricting their attention there, but this runs directly counter to many of our other pillars (Autonomy, Respect, Personal Growth, and even Positive Impact). Given that, the only equilibrium we can reliably uphold is to be fully transparent about as much about Modulate as we possibly can. 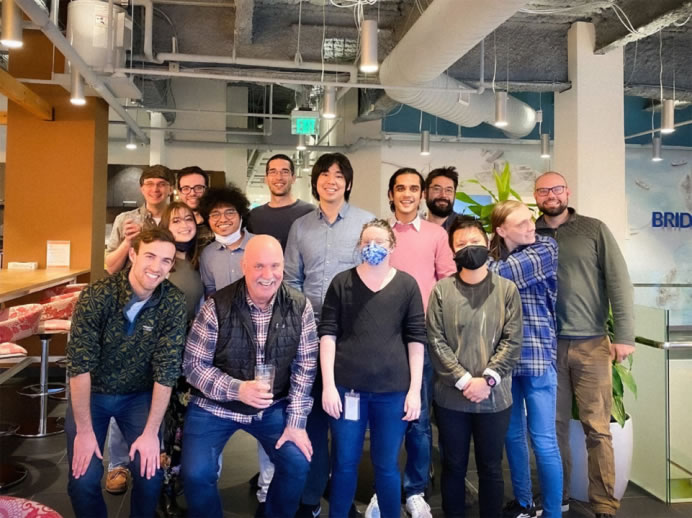 Any questions? Email us at contact@modulate.ai and we'll get back to you as soon as possible!